A few days ago I found myself standing in an interesting spot, at least I thought it was interesting.

I was led there, to this interesting spot, by a friend to wait for another friend to go somewhere else.  So I probably couldn't find my way back to this spot on my own.  It was a short bus ride to get there and it was in front of what I'll call a "market street".  This market street looks more like what I'd imagine a Chinese street to look like if I'd never been here.  What I'm saying is that most streets here don't look like this. It even has one of those big Chinese gates arching over the road like you see in China-town in Seattle, and probably in other "China-towns".  I always thought that was just something quaint we did in America to identify where a "China-town" starts, but I was surprised to find these ornate, but door-less, "gates" all over the place in Taiwan, and now one here, in China.  But that's where we ended up, standing near a Chinese gate listening to catchy techno music and the traffic.  I did a few dance moves, but not enough to attract attention. 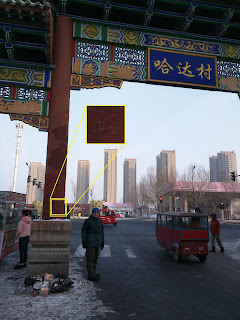 I noticed something I hadn't seen yet here: tuk-tuks.  I know that's not what they call them here, "tuk-tuk" is a Thailand term, three wheeled, two seated, taxis.  That was the only place I'd seen them until now.  Only here they are completely enclosed, which makes sense because it's really cold here!  You can see a couple of them in the picture.

I thought this spot was kind of picturesque, in an odd way, looking from behind that gate looking out over the wide busy street towards a couple rows of tall slender, brand-new and probably unoccupied high-rise apartment buildings in the distance.  A little pile of garbage piled at next to the gate.  My favorite part of this view was on one of the red wooden round pillars on either side of the gate.  The pillar on the left has a two character message, basically graffiti, penciled across it: 中国.

95% of Chinese characters, graffiti or otherwise, confuse me as they confuse you, unless you happen to be learning Chinese.  Yes I've learned some of the verbal, but not much of the visual: I need to learn how to read those things, I know, I know.  But in this case I was happy and not frustrated because these two characters were very familiar, I knew what they said, they said: "China".

I'm not sure what the message really meant.  I'm not sure why someone would write "China" on a red post in the middle of China.  Most people wouldn't see unless they were standing right there listening to techno music.  I guess that's what you see when you look through that gate: you see "China" beyond that gate, but then again it's also behind you.  But that's what I was looking at anyway, and that's what I was thinking about: China.

I'm trying to imagine someone writing "United States" on some sort of unremarkable landmark, in pencil, somewhere on some unremarkable intersection in Seattle.  On the other hand, I just remarked about it, so now it's remarkable.  I might even find myself awake tonight thinking about it, wondering why anyone would write it, and why they would write it in pencil.