Since we've been here, a little over a month, we've helped our room-mates accumulate boxes.  We've procured two air-purifiers, a humidifier, a queen sized memory foam mattress, a computer case, a computer power supply, plug strips, two sets of curtains, and two bedroom dressers.  Most of these things have actually been ordered online (taobao.com), the Chinese version of ebay, and delivered to us through a delivery service in big cardboard boxes.

For awhile we kept most of the boxes, you never know if you're going to need to take it back.  Actually we had to take the humidifier back. It burnt out after only one day of use.  Our apartment is pretty big, three rooms, and two bathrooms, with two couples living in it.

We have a third room that we've been using as a workshop.  Dave has all kinds of tools, a few dozen wood chisels that he ordered on Taobao, a few funny looking saws, a weird looking hammer, and a few other things, just no power tools.  He even built a workbench without using any nails and attached a couple vices to it (also ordered on Taobao).  (Sometimes he tracks sawdust and wood shavings onto the big brown shag rug that sits in the center of the apartment with his socks.)  He also shares his workshop with all of our boxes and packing materials.  That is, until recently...

Recently Dave and Irene moved the workbench to the end of the room, cleaned up all the last remnants of wood shavings, and put that foam mattress they ordered on the floor and made it up as a bed.  We're expecting a guest soon.

For a majority of that day, or maybe it was two days, we had two big boxes next to our door stuffed with packing materials.  Throughout the day extra garbage from the kitchen was added to to boxes since they had the same destination as the kitchen garbage anyway.  I think I threw an orange peel into one of them.  They were getting full fast.

Eventually I had to go somewhere for some reason, either that or I had just been somewhere, and I grabbed one of the boxes, all that I could carry, and carried it down four flights of cement stairs.  There are two smallish garbage cans outside our "lobby" door on the sidewalk, the box was much bigger than either of garbage "cans" so I just set the box next too it, still full of garbage.

I wasn't entirely sure that it was "cool" do do that, to put garbage next to the garbage can instead of inside of it.  Even though I would never describe China as a clean place I assumed that they have rules about these types of things.

One thing that confused me, as I was doing this, was the size of the garbage cans.  There were two, and if I put them together they still wouldn't be as big as only one of those green plastic garbage cans that they have at every house in the U.S.  But these two little garbage containers were for the residents of an entire 15 story building! 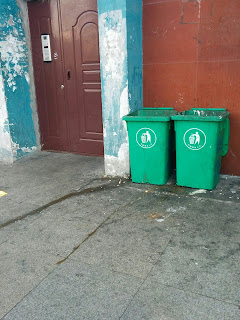 But the funny part happened after I got the second box.  I hiked back up four flights of stairs, checked out some network cables on the third floor that were hanging out of the wall, (I think I found where our Internet connection is piped into the building) Then I grabbed the second box of garbage and huffed it down the stairs again.  I used the stairs because I assumed anyone who might be in the elevator wouldn't appreciate sharing that tiny space with a box of garbage, even though it kinda already smells like it.  When I got outside the building to set the second box of garbage next to it's brother, it was gone!  The box of garbage, big enough where I couldn't wrap my arms all the way around it, had disappeared.  Someone "stole" our garbage!  Either that or I timed it just right and the garbage had just been picked up by the Chinese garbage trucks.

Fifteen minutes later I had returned to the apartment, via the elevator, and we were leaving to go somewhere to buy something, or eat something, or whatever, and I looked over at the garbage cans: no box.  Someone had pilfered the second box of garbage too!

I mentioned it to my wife, and whoever else was with me at the time, and we all decided that it was probably taken away by the people we occasionally see going through garbage cans apparently looking for things to recycle.  I've certainly had much slower service at restaurants.  Maybe next time I'll leave a tip.