I always thought that electronics, computers and phones, liked to be cold.  Probably because some super computers have super cooled chips.  But that's only partially true with smart phones, some parts really don't like the cold, like the battery.

A Few days ago Becky, Jessica, and I, put on our warmest long-underwear, our woolen long-sleeved moisture-wicking undershirts, our down-stuffed jackets, you get the idea. Then, after getting a little lost, we met three of our friends, got on a bus for about 45 minutes, then we got off a little sweaty from all the clothes we were wearing.  After getting off the bus we walked for several blocks through the city to the riverside.  It started to get exciting when we saw pillars lining the sidewalk that were made from ice blocks. 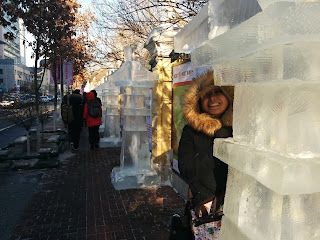 Although it has nothing to do with the story, when we got to the riverside there was a big IMAX theater where I thought about trying to watch Star Wars.  Star Wars only came out a couple days earlier here in China and I hadn't had any time yet to go see it.

At this point, standing in the frozen riverside park, we were starting to feel the wardrobe mistakes we had made that morning.  Jessica and I both felt that we'd feel more comfortable if we'd worn more layers of pants, our legs were cold.  My jacket was warm, but I felt little drafts hear and there when the wind blew.  One of our friends asked us if we wanted to warm up in the hotel or start walking to our destination.  It was a long walk.

In the end, although it was barely noon, we had to make a few phone calls and reschedule dinner otherwise we'd have to rush ourselves across the river, see snow world, and rush back.  So, thankfully, we walked towards the hotel.

The hotel was quite beautiful, it's lobby had massive marble columns and a huge sweeping marble staircase.  Along the side of the sweeping staircase there was series of about 50 bathtub sized glass bowls each suspended from the ceiling a little higher than the next.  Each bowl was pouring water in the next bowl until they reached the bottom where the last bowl spilled out into a fountain.  So this was where we hung out for fifteen or twenty minutes, huddled in the corner of this huge swanky hotel lobby where we had found a small sitting area.  There were a few other people there that looked like they were resting too, I think the girls used this time to insert "foot warmers" into their boots.  Personally I felt a little out of place surrounded by all that marble and granite.  But it wasn't long and we were walking across the street towards the river and "Snow world".

There were a few hundred people on the river.  I should point out the temperature was about -10 degrees Fahrenheit, that's 42 degrees below freezing.  (I think 42 degrees above freezing is 74), so when I say "on the river" I mean people that were walking, running, and playing on ice.  I also saw a little marina near by with little boats in it's docks, all frozen solid into the ice. 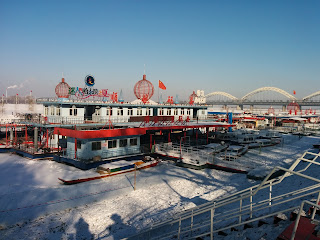 On the ice there were dogs tied to sleds, horses, snowmobiles, six wheelers and four wheelers with sleds tied to the back of them.  There were people ice skating, playing games, people selling ice cleats, food, scarfs, hats, and everything else.  Then there were six of us walking slowly and carefully across the ice. 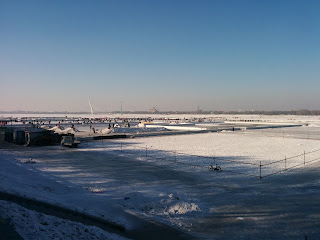 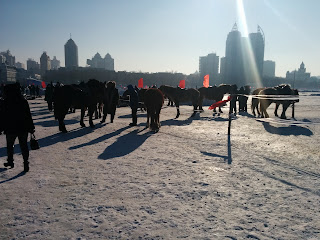 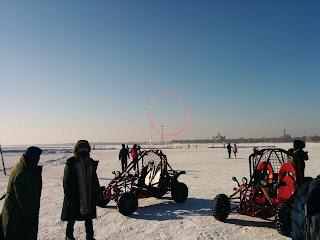 I was in the back of the pack walking the slowest.  The ice was smooth and slippery.  I felt like every step I took slipped a little.  After walking about a hundred feet my thighs and legs were already starting to feel fatigued from using my seldom used anti-slipping muscles.

I was starting to worry.  We had to walk exactly 1.0 km on the ice and I was already starting to feel it at 0.2% of the distance that I was planning to walk.  But thank goodness, after another hundred feet the smooth ice disappeared and was replaced with packed snow, a hundred times easier to walk on.  The smooth ice, behind us, had been cleared off for ice skating and stuff.  But I didn't know this when I started walking.  Thank goodness!  I almost back ashore and watch Star Wars in the IMAX.

About halfway across the river the cold started to get to us.  I kept trying to take pictures but my hands would go numb so quickly, in seconds instead of minutes.  Thank goodness I had mittens so I could make fists inside of them to warm my fingers. We also started to realize that our phones weren't working.  It was too cold, the batteries were dying!  I guess the chemicals inside the batteries were not able to produce enough electricity because they were freezing.  One of our friends who had been around for a few years said we couldn't keep our phones in our outside pockets or they would freeze like that.  So I kept my phone in my pants pocket, which was covered by my big down jacket.

Keeping it there, in my pants pocket, kept my phone working.  But to actually use it I had to take it out, and I had to use my bare hands to operate the touch screen.  At one point during the day I tried taking a sphere photo.  A sphere photo is a camera feature of many phones that allows you to take pictures in every direction then, when you're done, it stitches them back together into a rotating sphere.  It's like being there almost.  It usually takes a few minutes to take all of the pictures to do this, maybe fifty pictures in three minutes, but my phone died completely right after the last picture and I lost all of the fifty sphere shots.  Which is too bad, I liked that one.

And with that sad note I'm ending this blog entry, I'm tired.  I'll add another one about Snow World later.