Well I'm in Korea now.  To be precise: I'm on Jeju Island, South Korea, in the Best Western Hotel.  We will be here for six days total.  Our primary purpose coming here is to get our passports stamped. This resets our Chinese Visas which, although they last ten years, only allow 60 day visits.  So we're technically tourists touring Asia, technically and practically.  I'm not sure where we'll go next.

Before you get excited, thinking that we're seeing amazing sites and drinking fruity drinks with little umbrellas in them, I'd like to point out that we plan to spend a majority our time on Jeju Island in our 13th floor hotel room.

The first time I ever go to a country I start looking around at things, looking for things that I've never seen, new things.  In this case: Korean things.  The first thing I remember seeing Korean was the written language.  Like any airport, there are at least three languages on every sign. Here they have Korean, English, and Chinese.  Anything that's not a sign, or not meant to be read by as many people as possible, is in Korean.  Something I wouldn't really notice back home in America.  In particular I remember seeing lots of Korean writing on two 7ft tall metal boxes with lights on them that flanked the escalators.  We think that they were some sort of security scanners, but we couldn't read Korean.

Then, of course, there's spoken Korean, the language all the airport employees speak to each other.  To a large extent they spoke it to us too, the visitors coming through immigration.  I was standing in the very front of the line, obediently behind the yellow line, watching my wife talk to the quarantine agent ahead of me, when I felt someone squeezing past me in line.

A short middle-aged Chinese woman burst past me, slipping past my wife and the agent sitting in his little booth, and into the area beyond the barriers where only people who had been approved by the government quarantine agents were allowed to be.  He yelled at her in Korean as she ignored him and kept walking.  I felt my eye brows raise as I glued my eyes to her back pack, making sure not to lose sight of her, I expected him to run out from behind his desk and tackle her, or security guards to pounce on her.  But none came.  Eventually, after maybe a minute, she came back and walked back through the line pretending nothing had happened.

As a rule-following oldest child, and according to child-order psychology, I always find it interesting to see what happens when people break the rules.  Usually nothing.  Thankfully international air travelers can rest easy: although she was able to break through the quarantine barrier, she returned to the back of the line with her small yellow form, that she had honestly filled out like the rest of us, with a list of symptoms and yes/no check boxes.  Let's call that a "Korean Quarantine" even though it's exactly the same as an an American quarantine we can call everything "Korean" here because we're in Korea.

After we got through all the check points and retrieved our luggage we were outside looking at more Korean things, like palm trees.  Even though it's just the right temperature outside for snow, Jeju Island is apparently covered in palm trees.  Yes I know that Korea isn't the only place with palm trees, but I didn't see any in China.  So, now, when I think of Korea I'll think of palm trees.

Jeju Island looks a lot like California to me (probably because of the palm trees), mixed with China town, but with that circular Korean script written on all the signs.  In many ways it looks more like China than where I've been living for the past two months.  But it smells a lot better than China, the air is very clean here, and the plumbing and sewers seem to work correctly.  Sorry China, I try not to say mean things about China, but it's the truth: China smells bad. 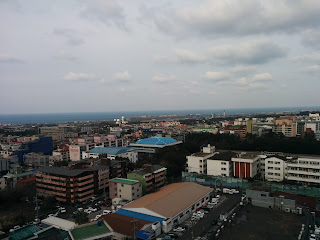 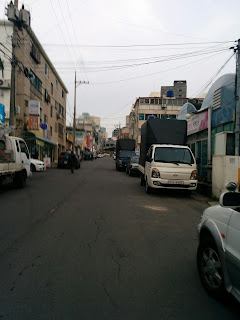 Becky and I went out for lunch at 3pm, but most places are closed at 3:00 I guess, so we ended up eating fried chicken.  But on our way back to the hotel we saw a tank outside a restaurant full of little octopuses, one my favorite animals, some were stuck to the glass, one was walking all octopus-like across the bottom, and another one was swimming back and fourth.  It makes me kinda sad that people eat such wonderful little creatures, but I also find them delicious. 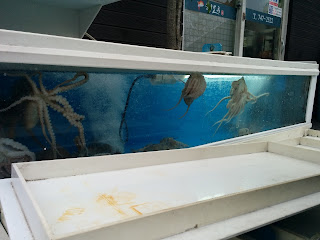 The thing that surprises me the most is Korea's lack of chairs, they just use the floor.  At the Best Western here you can even get a room with no beds or chairs, just a hardwood floor and maybe a few sleeping mats hidden somewhere.  Everybody sits on the floor.  When we were flipping through the channels on the TV in our room we saw a reality show that showed the inside of a few apartments, everyone was on the floor, there were no chairs in sight.  The dinner table was a foot or two off the floor.  Even as a skinny kid I found sitting on the floor to be a pain in back.  Now as an old fat guy, I'm crossing Korea off of places I could live.  Although I guess I could just buy some chairs and turn down all invitations.  Either that or I could invent pants with an inflatable chair sewed into the butt.