Today was a long day, I smell like three different kinds of smoke at the same time, cigarette smoke, then the smoke from fake money being burned on the sidewalk for someone's ancestors, and the smoke that's always been here.

The smoke that's always been here was the first thing I smelled when I got here, driving into the city from the airport.  We suspect that this smoke comes from the coal that is burned to keep us warm.  The city seems to be warmed by various "central heating systems", which I think are identifiable by large smoke stacks.  While I worry that this constant smoke is bad for my health, especially in the long run, I am glad that I'm warm.  Today was one of the cold days, one of the days where any skin touching the air burns likes a bad sunburn.  This smoke is the same smoke that I see on the little weather indicator on my phone that says: -15 degrees (F), "Smoke".  That's what they call the "weather" here when the air is bad.

The smoke from the fake money isn't a brand new thing.  We've been seeing it since we got back from Korea about a week ago.  We saw it in Taiwan back in 2008.  In Taiwan you couldn't walk very far on any sidewalk without tripping over a coffee can sized burning barrel full of fake money.  People buy fake money, made from special paper, that they can burn for their ancestors.  That way their ancestors will have money to spend in the spirit realm.  I wonder who's face is on the bills.  I imagine that the exchange rate isn't very good.

Here in China they practice the same burning of money for their ancestors.  One difference though is that they do it in busy four-way intersections, and they don't put it in any sort of can or barrel, they just burn it in a pile on the pavement.  A friend of ours told us that they burn it in the intersections so that when their ancestors come by to pick up the money they can quickly be on their way.  Kind of like a drive-thru I guess.  I imagine people don't want their dead ancestors to stop and visit either.

It's hard to cross the street without weaving through a few burning piles of ash.  So I'd smell like smoke anyway.

The cigarette smoke is new, fresh you might say.  China has no shortage of "No Smoking" signs on buses and in buildings.  But, while I'm not sure of the laws about it, restaurants do not necessarily have "No Smoking" signs.  Honestly I never looked, there's a good chance that there actually was  one.  I guess when it's -15 degrees (F) outside it's even harder to get people to go outside to smoke.

The first floor reminded me of a standing auction or something.  It was loud, and full of fish tanks with huge limpets, a cute little turtle, and lot's of fish, the kind you eat.  There were young women wearing red caps standing around with cell-phone like devices in their hands taking orders from people who were standing around looking at pictures of food on the walls.  There were also plates of food covered in plastic wrap set out to look at.  There were at least a hundred cases of the local beer stacked against the walls, and think along the stairs too.  I don't remember anyone actually sitting and eating at a table on the first floor, it was more like a market or a tiny airport.

We were led to this exciting restaurant by our friend.  We had invited him and his wife over for dinner but his wife wasn't feeling well so it was just hime and he couldn't eat fish.  The place we had planned to take him was a fish restaurant.  Needless to say I was kind of surprised that the majority of the food I was looking at pictures of had fish in it.  Not to mention the fish tanks.

The large colorful pictures of the various dishes you could order were not as helpful as you might imagine, but we managed to order four dishes for our little table of three.  We got a table card from some other person, I think she was wearing a black cap.

All the tables were upstairs, there were at least four private dining rooms, lined with low glass windows looking in.  Private rooms seem to be extra popular here.  There were three little kids playing next to windows facing our little table.  Every once and awhile I'd make a face at them or wave.  One of them tried talking to me through the glass.  I said "What?"  Eventually he came out the door so I could hear hime, but I still said "What?"  I said it in English just to be annoying.  That's how I am.

Often times there is something that triggers my desire to blog about it.  It's usually not even the thing that I focus on in the blog, like how this blog starts out talking about smoke.  The thing that triggered the blogger inside of me was the bowl of fish that was set or table, the first thing that showed up.

This bowl, the first dish that showed up at our table, was huge.  It was almost a joke size, It must have been two feet across.  I took pictures of it but the pictures, like the grand canyon, just don't look as big as it actually was.  Maybe it just felt extra big because I was aware that there were only three of us to eat all this fish.  Yes.  Fish.  I'm not sure why we ordered fish when the whole reason we came here was because our buddy wasn't able to eat fish.  Oh well.  It was full of hot peppers and tongue numbing peppercorns, delicious. 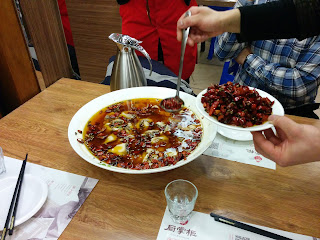 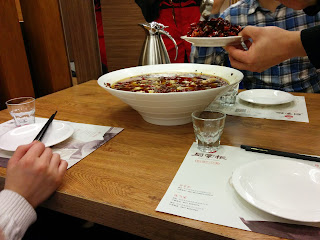 Of course it turns out that the bowl was mostly full of bean sprouts with a layer of fish floating on the top to make it look like more food than it was.  Even so it was a lot of food, and there were three other dishes, though not quite as expansive.

The dinner was pleasant other than the two guys sitting right behind us smoking cigarets.  On their second round of smoking our friend started waving the smoke around with his hand.  I told him that waving the smoke around wasn't doing us much good, it didn't have anywhere else to go, but eventually the smokers notices is smoke waving and apologized and moved to some other room or went outside.  I guess waving smoke around actually does help sometimes, and I guess smokers here are pretty nice about it if they notice.

Our dinner guest, who guided us to this restaurant, told a few times us that this restaurant was very popular with the locals and very well priced.  I believed him.  I've heard that the way you rate a Chinese restaurant is by how loud it is, by how many people are in it talking loudly and enjoying their food.

He told us too that it wasn't a popular "foreign" restaurant, mostly local.  I believe him there too because as we were finishing our dinner and as plates were being cleared away one of the "foo woo yen" (waitresses) gave us a small questionnaire.  Initially she gave it to him, since he had done most of the talking, but he asked her if she wanted me, the white guy, to fill it out in English.  She loved the idea.

After I wrote a short note complementing the food and the service I felt like I was the first westerner to ever eat there.  As we were walking towards the stairs Becky pointed out to me that our friend was translating my little note out loud into Chinese for five people behind the counter.

Of course this certainly isn't an every day occurrence in our life here, people usually don't care or even seem to notice that I'm a white guy in Chinese city, but I thought it was fun and I thought I'd blog about it.

So that's the story of why one of the three smokes I smell like is cigaret smoke.  I'm going to take a shower now.