My time is spent much differently these days.  I spend quite a bit more time at home than I used to when I lived in "The States."  (That's what Americans call America when they aren't there, "The States.")  But in Chinese we call it 美国 (Meiguo or May Go Oh), which is how we usually talk about it.  You'd be surprised how many questions we get about Meiguo.  A lot of them are questions about how much things, like houses, cost, and what foods we have or don't have in "The States."  Honestly it's annoying after awhile.  But that's the price we pay for being foreigners.
The benefits are many though.  Cute little kids always stare at me, people love talking to me, and a lot of people think I'm beautiful.  I'm trying not to let it go to my head.  Did you know that beautiful people sometimes get free stuff?  Like "compliments of the chef" appetizers.
But I'm not going to write anymore about how beautiful I am, nor will I post pictures of myself here or on Instagram.  It's that "flex-time" that I spend differently I'm talking about.  Our bedroom window looks out over one the busiest intersections in this city,  a couple months ago they started ripping out trees and digging holes, they are starting construction on a new subway line.  I don't know if I've ever mentioned it, but I love subways, but that's another blog entry.  So there's lot's of things to watch outside our window.  I've even recorded two videos from our window and pasted them in this blog.
The first video is a specially fitted back-hoe, I'm sure there's a better name for it, driving steel beams vertically into the ground.  The hole it's digging looks like either an elevator shaft, escalator shaft or the beginnings of a drainage system to support the new subway. 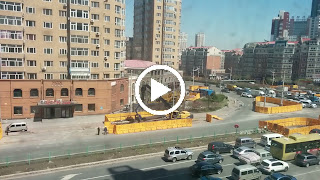 Across the Street to the Right
The other little video is unrelated to subway construction.  This video is something you might see every day here in China.  Something that a local Chinese person would wonder: "Why on earth did he take a video of that?"  It's a video of restaurant staff doing their morning dance calisthenics on the sidewalk.  They do it during the slow times of the day, before lunch around 10, then after lunch at around 3.  I remember the first time I saw them do it was during the winter.  They were dancing inside the restaurant since it was cold outside.  It was a little surprising.  I wonder if any of the restaurants around here will assemble the whole dance team and dance for you if it's your birthday here, kind of like Red Robin.  But I guess if you really like to dance, but can't make it as a professional dancer, you can work at a restaurant here.  By the way the music they play is extremely loud, it echoes off of the buildings. 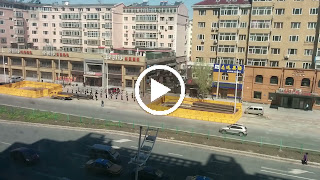 Across the Street to the Left
But I didn't really start this blog entry to talk about how "wait staff" is synonymous with "dance team" here.  The only reason I mention the dancing and subway construction is to illustrate how I occupy my time with weird things here.  I'll stand in front of the window and lean my head on the glass and stare out over the street wondering about the lives of the people I'm watching.  I think it's an isolated way to spend your time, and I think it makes you a little weird.
If you've ever thought that someone from a different country who lived in your area was little weird, but you figured it was just their culture or their different customs, maybe even the language barrier, think of me, I'm one of those people.  But I'm not weird because of cultural differences, it's not American culture that's weird, it's me.  It's probably because I spend way too much time with my head leaning on the glass staring at cars as they drive by.  It's probably also because I can't understand what people are saying to me or about me 80% of the time, so I just smile, daydream about something else, and hope it's all nice things.  It's probably because the hot water tank in my bathroom has a schedule that doesn't quite jive with my schedule because I can't program it because all the menus and buttons are in Chinese.  I've looked up the characters but they don't make sense.  The clock is wrong too.  Why do hot water tanks have clocks and remotes here anyway?  I guess it's to save energy.
Of course if you actually know me, you know that I was already weird before I came here, and that I can't blame it on being a foreigner.  But, also, you know that I'm quite happy being weird, if anything I've cultivated it over the years.  But there is a point where I need to draw the line, or so I've recently discovered.  And that's why I started this blog entry, the moment when I realized that I'm officially in danger of becoming "a weirdo."
I was on the bus a few hours ago, on my way home.  Two other foreigners got on the bus right in front of me, they appeared to be from the middle east or somewhere east of the middle east, either way they weren't from here, and they weren't speaking English.  We were all lucky enough to get a seat, for some reason the bus was empty when we all boarded it.  I was actually sitting directly across from the two foreigners trying not to make too much eye contact.  But I noticed that they smelled good.  They were both guys so this was particularly exceptional of them to smell good.  I was trying to think how I could tell them that they smelled good, wondering if I should say it in Chinese or take a risk and say it in English.
But then, that's when it occurred to me.  I was a weirdo.  That's like something a large overweight hairy sociopath says to you in prison after the guard locks the cell door and leaves.  I can imagine the two guys getting home that day talking about it to their friends: "Some weirdo on the bus stared at us for half an hour then told us we smelled good.  We told him to mind his own business in Chinese but he just smiled at us and nodded with a far away look in his eyes."
But I didn't.  I didn't tell them they smelled good.  And if you're worried about me, don't worry, I didn't even want to say it after it occurred to me that it was weird.  But I guess I'm blogging about it, so I'm still pretty weird.