Yesterday I rode the subway.  While we were away visiting The States they added a new subway line. 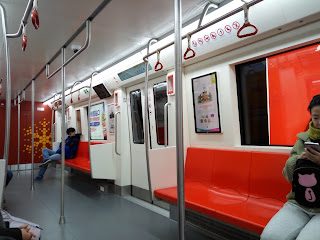 The city we live in, of about eight million people, had, when we moved here, one subway line. The subway was brand new, not even two years old, it was "Line 1", and it's color was red. I didn't know that it's color was red until the new yellow "Line 3" appeared on the little subway maps at the station, distinguishing it from the red "Line 1."  I kinda thought that red was just the color of subway system. It is, after all, the color of their little "Metro" logo. 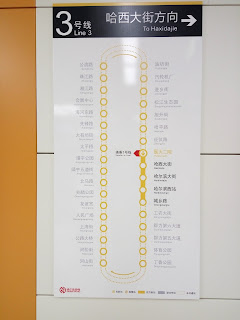 The term "Metro" make me smile a little bit. I think I've had more than one conversation about how to say "subway" in English. Oftentimes English learners get confused at the terms we use to refer to the subway. In Seattle it's the "light rail", in New York it's the "subway", I think in London it's the "tube" or "the underground" or something. In San Francisco we called it "The BART", in Taipei, when speaking English, we called it the "MRT." But it's often called the "Metro" too, actually that's part of it's official name here.

As a nerd I'd like to point out that "Metro" has a lot of meanings, and I believe it comes from the word "metropolis" which basically just means "big city." I've also heard the word used to refer to the area around the city limits, or smaller cities and communities that are so close to a bigger city that they are kind of part of it and often, like in the case of Bellevue and Seattle, share a public transportation system. Anyway, it's just fun, in a dark sort of way, as a foreigner struggling with the local language, to see the confusion on someone's face who thinks that they may have been saying "subway" wrong since they've been speaking English. And then the horror on their face when they learn there are several ways to say it, but that they can't just interchange them.  I know the feeling.

"Wait a second! What happened to Line 2?" you might be thinking. Don't worry, they're building it. This city is riddled with construction sites in the middle of major intersections surrounded by little plastic yellow walls with the local "Metro" logo on them. I don't think that the subway line numbering, (Line 1, Line 2, Line 3) is intended to indicate the sequence that the lines were built. I'm sure when they finish and open up Line 2 for business it will look like it was there before Line 3.

So anyway, I rode the new Line 3 all the way to the end, which is only two stops away so far, but the last stop is the huge train station to the west. It's gigantic.  A train station is a good idea for a subway stop if you ask me.

The new subway line is shiny and new and has quite impressive LCD screens above each subway car door showing which stop you're going to.  It also shows which side has an open door, sometimes it's the left side, sometimes it's the right side. An older subway car usually just has a big green or red light to show which door will open.  People like to know what side is about to open so that they can push their way through people to get close to the door before it opens. When the subway car is packed tight this is pretty important information.  Nobody wants to miss their stop.

But on this new Line 3, the LCD signs are wrong, backwards actually. The LCD screen above the door that is closed says it is open, and the open one says it is closed, in both English and Chinese. Being a computer programmer I couldn't help but smile and imagine how frustrated the programmers must have been trying to find whatever bug that caused this. But they released the software anyway because, though embarrassing, people are really good at knowing when doors are open or closed, and the subway is not yet packed tightly since Line 3 only has three stops.

I even took a picture of the new LCD screens because I thought they were so cool. I love subways but I haven't seen any with LCD screens like that. They are extra special too because they are short but very wide, most LCD screens are TV shaped with that letterbox 16:9 ratio. They must have these long screens manufactured especially for subway cars.

When I took the picture I noticed the guy sitting across from me watching me. Then a minute later he took his phone out too and made a little video panning around the subway car.

But one of the highlights of my subway tour was my ride up the escalator on the way back home.

All over in northern China young people wear long warm black jackets that say odd things in English on them in big capitalized letters. The one I see the most is "SCHOOL KILLS." I'm not sure exactly what it means, but it might have something to do with high suicide rates amongst the students. A sad thing. But often enough I see different things written on black winter coats that make even less sense.

On the back of the coat of the girl in front of me on the escalator I saw written: "CARNIVAL FEAST." I can only guess what it means, a hip new band?  Maybe she likes the food at carnivals?  But why would she have that written on her coat? Maybe that's the point, to confuse Anglophones like me. Maybe it's just too deep and I wouldn't understand.

I was so flabbergasted at this message that I pulled out my phone to take a picture of it. Normally I'm a little shy to just take pictures of people, people would probably see me doing it and think I'm weird. But on this particular escalator, at the vertical level I was, there were walls on both sides shielding me from the eyes of any onlooker, and everyone in front of me was facing away, upwards.  My huge puffy winter coat shielded activities close to my chest from the eyes of everyone behind me.  So I went for it. I pulled out my Chinese cell phone and tried to unlock it...  My phone was giving me grief, so it took a few moments longer to get to the camera app. 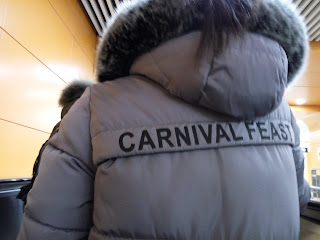 But by the time I took the picture I had already emerged from the depths below and from between the walls on either side of me that blocked view of my activities from the eyes of onlookers. When I looked up from my phone there was an old cleaning lady standing to the side of the escalator, at the top, staring at me. I think she caught me. But I'm not really sure.  She had a tired expressionless blank stare, she may have just been staring at a funny looking foreigner unconcerned with what he was taking pictures of.